Through painting, the faces of the dead go on living for a very long time.
—Leon Battista Alberti

I. The Girl With the Wineglass

What parent knows the thoughts of a young daughter?
Assuming that his model was Maria,
Vermeer’s first born, posed as he often caught her
giving that mocking look he used to see—a
kind I saw when my own teenage child
stared at me if I tried to interfere
with what she did; her challenges were mild,
a quiet distance captured by Vermeer.
And all the space around his characters
is calm, the open window, patterned tile.
The viewer’s free to see what she prefers:
the suitor’s leer, the maiden’s too broad smile.
Some parents might be glad never to know
what her mysterious glance might really show.

What her mysterious glance might really show—
how can we guess? She doesn’t look at us.
White letter floats above; blue dress below
spreads all around; her waist’s voluminous
while flattened on the wall another globe
suggests the father writes from overseas.
But now the scholars say her ocean robe
may just be fashion and not pregnancy.
When I was pregnant I just looked too fat,
so on the bus most riders let me stand;
I’d read a book with half a mind on what
I read, another half on what I planned
or hoped to do once I had had my daughter,
a window opened on the sound of water.

A window opened on the sound of water,
her face is glowing with great happiness.
What is she thinking of, this burgher’s daughter—
the beauty of her showy mustard dress,
his gallant gesture, conﬁdent and bold?
A velvet elbow in swashbuckling stance
creates a shining triangle of gold;
together they’re an emblem of romance.
This memory of what love used to be—
a golden haze, a dash of velvet red,
a glass of wine, and possibility
of travel in the map above your head.
Now they’re long gone and have nowhere to go;
Vermeer paints what we know we cannot know.

IV. Girl Reading a Letter at an Open Window

Vermeer paints what we know we cannot know:
the light appears miraculously on pearls,
the figure vibrates in a yellow glow
that falters through the leaded pane. His girls
are either sinking deep inside their heads
or staring from the frame at Jan Vermeer
whose vision of their shining golden threads
the camera projected to his rear.
He paints another view of her that hovers,
a gibbous face faint in the window fog;
while scholars speculate about her lovers
and iconography they catalog—
the fallen fruit, the rumpled rug, gold curl—
I only feel the distance from the girl.

I only feel the distance from the girl
alone, asleep; we know our children drink
and in their drunkenness the room might whirl,
but we cannot imagine what they think.
X-rays show us an absent man, a dog
as if the work were painted by de Witte
(a pooch in church!) or Maes or Pieter de Hooch;
could she be drunk and snoring just a bit?
Above her on the wall, a painted mask
suggests that some small drama might exist,
but as I never got the chance to ask
whom my dead daughter might have loved or kissed
or if she died untouched—she never said—
before her is a solid barricade.

VI. Woman with a Pearl Necklace

Before her is a solid barricade,
abandoned instruments and furniture,
a monument of light in stiff brocade,
a golden jacket trimmed in spotted fur
that signifies the season and the class
and that the painter liked this warmer hue
against her skin as she looks in the glass,
as if adornment’s all she has in view.
She puts her mask on for the world to share,
the mask the painter paints and lets dissolve,
the mask that seems to say she does not care,
a mask whose studied beauty can’t resolve
the meaning of this enigmatic girl,
a grace note struck that shimmers like a pearl.

VII. Woman with a Lute

A grace note struck that shimmers like a pearl,
the string her right hand casually picks,
as her left fingers elegantly curl
around the pegs; below, the harmonics
are sounding on the half-forgotten viol;
she’s far from us, her back against the wall,
and does the curious glance, the subtle smile
suggest she hears her suitor in the hall?
No narrative’s provided by Vermeer.
The lover might be far (the map behind);
the instrument might be a sign he’s near.
I see in her something I need to find
but I can’t hear the music that she made—
the image just the surface that she played.

VIII. A Lady Standing at a Virginal

The image just the surface that she played;
the music that the painter draws is not
more sweet than if the stops were pulled and stayed.
Like Orpheus, one sense is all we’ve got.
This caryatid holding up the sound
divides the painting as one might the strings
and splits the dark and light of the background,
so that it seems a perfect octave rings.
The music that he paints is so divine,
unwrapping all our tendons and our joints,
unstringing all the nerves along our spine;
it is not sound but light in brilliant points.
But still one sense is not enough for me;
her picture is a frail metonymy.

Her picture is a frail metonymy
of justice as the balance comes to rest;
behind her, Christ is sorting damned and free.
Pale as the damned, she weighs a nothingness.
Despite an urge I feel to simplify,
I can’t clear out my daughter’s childhood room,
to organize the clutter for the eye,
to leave the space wide open for the broom,
to narrow down my life to just one task,
to tune the instrument in morning’s glare,
to be someone who never needs to ask,
to stand and stare but really not to care,
to feel myself become my social mask,
a single room that might be anywhere.

A single room that might be anywhere,
a black-edged frame contains the world for me:
a man, a window, instruments, a chair,
a glow that spreads inside just like the sea
whose briny smell came through to Jan Vermeer.
As if, at last, I’m in the lady’s head,
as if her vision in my eyes appears:
ﬁne wine, a globe, sheet music, letters, bread.
By emptying the room of extra stuff,
he underscores the overtones of space,
the countless symbols painted with a brush,
the outline of the loss we try to trace
when bodies sink into their gravity,
a plaster wall’s the emptiness we see.

A plaster wall’s the emptiness we see
behind the woman’s strange reﬂected glow
when she’s alone and she can ﬁnally
feel all the things she never wants to show:
familiar strands that follow endlessly,
the steady stitch that goes as it must go;
he paints the distance, strength, dexterity
behind the mundane tasks that women know.
The patience, art, and industry to sit
for hours dissolving in the sunny plaster,
a face half-lit, her ﬁngers poised to knit,
and nothing telling her she must go faster.
In moments when our thoughts and work cohere,
we’re every one of us a small Vermeer.

We’re every one of us a small Vermeer,
our selves emerging from a hand or face.
This maid has massive shoulders, arms and rear
that fill and organize an emptied space.
The painter shows his own delight in work
by rendering her focus at her chore,
the elegant precision as she measures;
it seems the tiny tile at the floor
of Cupid might suggest some other pleasures.
The broken pane, the rough-hewn plaster textures
the wet-on-wet, impasto, glazes, scumbles,
techniques that scholars teach in schoolroom lectures,
the inward focus as the outward crumbles,
this knowledge that we’re always on the brink
just as the liquid pours but never sinks.

Just as the liquid pours but never sinks,
I every day defy the gravity,
deny there’s any reason why I blink,
except perhaps a mote caught in my eye.
Behind her form, the map and sun-splotched walls,
the lightness where her dark dress is immured;
outside the colored glass, the morning calls
of sailors and the slap of boats secured.
Preparing her ablutions for the day,
she heard the neighbor’s baby as she laughed,
and smelled the rotting food and salty spray;
she’s shutting out the boats and morning draft—
but these are only my imagined links;
there is no story telling what she thinks.

XIV. Girl Interrupted at Her Music

There is no story telling what she thinks;
our own close-guarded children can’t be known,
so we extrapolate from the small chinks
in adamantine armor they have grown.
Vermeer reminds me of my ignorance.
With any child, insight comes unplanned;
from time to time an unexpected glance
creates the image that we understand.
I try to ﬁnd my daughter who is dead
in music, painting, or a carved stone name.
Her voice is gone, so many words unsaid,
a silent love the most we’ll ever claim.
Outside the window there is sky and water.
What parent knows the thoughts of a young daughter?

What parent knows the thoughts of a young daughter,
what her mysterious glance might really show?
A window opened on the sound of water:
Vermeer paints what we know we cannot know.
I only feel the distance from the girl;
before her is a solid barricade,
a grace note struck that shimmers like a pearl,
the image just the surface that she played.
Her picture is a frail metonymy,
a single room that might be anywhere,
a plaster wall’s the emptiness we see;
we’re every one of us a small Vermeer,
just as the liquid pours but never sinks—
there is no story telling what she thinks. 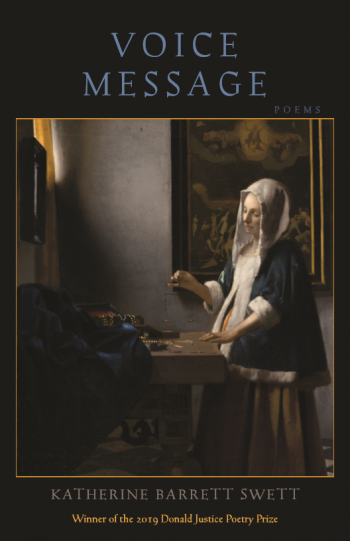 Winner of the Donald Justice Poetry Prize, Katherine Barrett Swett’s Voice Message explores through villanelles, sonnets, quatrains, and even free verse the consolation and devastation that art and poetry offers. AHP editors particularly love Swett’s crown of sonnets, entitled “Vermeer’s Daughters.” Each poem engages with a painting by Vermeer to explore and explain the poet’s own loss.

“In this powerful collection, Swett understands the force of traditional forms and, in poem after poem, presents us with a world almost worrisome in its wonders—how much grief we can hold, how much hope we will need.” —Erica Dawson