For the next week, AHP will be sharing the six sections of Michael Credico’s dark and dangerous short story “Postwar: Heartland” from his collection Heartland Calamitous; each day we’ll add a new section from the story right here for your enjoyment. We’ll finish the week on Sunday, April 12, with a video of Michael discussing the process of writing the piece followed by him reading the short story.

The sniper leaves his wife to save the whales. No. That isn’t true. The whales are a cover thought up by his wife, Sister. Actually, the sniper suffocated himself with a plastic grocery bag. And now Mother is expected at any moment. Suicide is a no go.

“Do you think whales are big enough?” Sister says to Brother. “Do you believe me?”

Sister and Brother are in the bedroom. The sniper’s body is still on the bed.

Brother goes to the gun safe. “Where do you keep the bullets?”

Brother flip-cocks an empty rifle. “I mean—it’s so much easier.”

“He was a professional. This wasn’t about business.”

The doorbell rings. Mother is praying on the stoop. Brother helps her up from her knees.

Brother nods at Sister like go ahead. Sister nods back like I can’t. “After god’s own heart,” Brother finally says.

“The great divorce,” Brother says. “Of an entire species.” Sister falls into Mother’s arms. Mother lifts a rosary out of her bosom. The crucifix hangs from her fingers over Sister’s mouth. “I will pray for sharks,” Mother says. 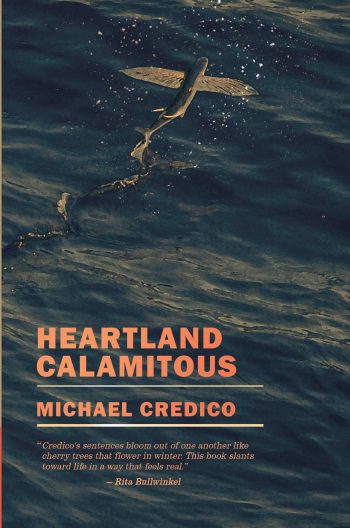 “Chiseled and coiled like a hungry serpent with a wicked sense of humor, Michael Credico’s stories lure you in with terrific sentences and just when you expect to be crushed, embrace you with an unexpectedly tender heart. Denis Johnson meets Donald Barthelme at a dive where Gordon Lish tends bar and Amy Hempel rules the jukebox. Don’t believe me, believe Credico. Read this book.”
—Imad Rahman, author of I Dream of Microwaves