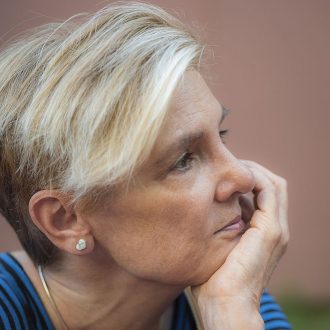 Winner of the 2018 Louisiana Writer Award

A native of New Orleans, Sheryl has taught at The University of Texas at Dallas, The University of Louisiana at Lafayette, Knox College, Iowa State University, and Chatham University, where she served as Director of the MFA in Creative Writing for 14 years. She is the co-founder and former Director of the Words Without Walls Program, which for over ten years trained graduate students to teach creative writing in prisons, jails and rehabilitation centers. Her work has received several awards, including two NEA Fellowships, an NEH Fellowship, the Dobie-Paisano Fellowship, the Ki Davis Award from the Aspen Writers Foundation, and the William Faulkner Award for the personal essay.

Sheryl’s poetry books include The Small Door of Your Death, Let it Be a Dark Roux: New and Selected Poems (both from Autumn House Press), Making Bread at Midnight, (Slough Press), and How Heavy the Breath of God and The Journals of Scheherazade (both from University of North Texas Press). She has published three chapbooks of her own poetry: Going Home (Perivale), The Mask of Medusa (Cross Cultural Communications), and a chapbook of translations of the Cajun poet Jean Arceneaux, Je Suis Cadien (Cross Cultural Communications). She has also published three memoirs, Fifty Miles (Etruscan Press), Swamp Songs: the Making of an Unruly Woman (University of Utah Press), and Navigating Disaster: Sixteen Essays of Love and a Poem of Despair (Louisiana Literature Press). She co-edited, with Margaret Whitford, Between Song and Story: Essays for the 21st Century (Autumn House Press), and with Sarah Shotland she co-edited Words Without Walls: Writers on Addiction, Violence and Incarceration, (Trinity University Press).

She was named Louisiana Writer of the Year in November 2018.