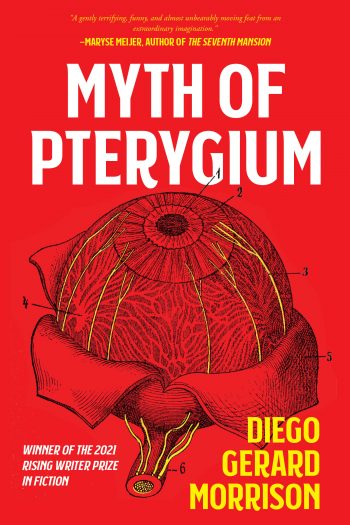 Thank you to Alfred Mac Adam with the Brooklyn Rail for his comprehensive review of Diego Gerard Morrison’s Myth of Pterygium, winner of the 2021 Rising Writer Prize. A Professor of Latin American Literature, Adam examines the form and function of Morrison’s work, saying:

Within the context of Mexican literature—Diego Gerard Morrison is Mexican, and his novella is set in Mexico City—the novella has had a central role. The first text to deal seriously with the consequences of the 1910–1920 revolution, Mariano Azuela’s The Underdogs (1915) is a novella, as is Juan Rulfo’s Pedro Páramo (1955) an analysis of tyranny and Mexican history. Rulfo’s short work with its wildly chaotic chronology inaugurates modern Spanish American prose fiction: without Rulfo, García Márquez and Carlos Fuentes would not exist. Myth of Pterygium extends and enhances this tradition and, like those antecedents, deals with specifically Mexican issues.

Find Adam’s full review of Morrison’s The Myth of Pterygium on the Brooklyn Rail‘s website.