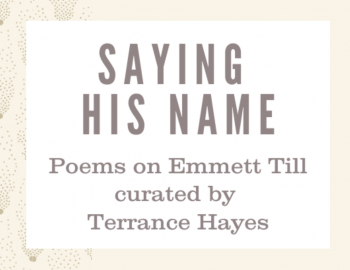 We are excited to share that Cameron Barnett, the author of The Drowning Boy’s Guide to Water, has had his poem “Emmett Till Haunts the Library in Money, MS” featured in a series curated by Terrance Hayes called “Saying His Name.” This series of poems featured on Poetry Society of America explores how Emmett Till has become a haunting, powerful figure in Black poetry. Here’s an excerpt from Cameron’s poem:

You can’t judge a book by its facts or flaps or back cover, but a black boy
is the title and the illustration staring you in the face, asking
to be seen or sampled but not smothered between the other
black boys, forgotten, dog-eared and ditched.

Explaining his reason for including the poem in the series, Terrance Hayes writes, “The only poem of this series to speak

in Till’s voice, Barnett foregrounds the 14-year-old’s boyish spirit. Though we now know Till did not “wolf whistle” at Carolyn Bryant Donham, this poem says, “So what if I did?” Barnett slips into the boy’s skin and the boy slips into his and we receive an irreverent adolescent…Barnett humanizes and restores Till.”

Cameron’s stunning poem is featured alongside the work of poets including Roger Reeves, Vievee Francis, Patricia Smith, Cornelius Eady, and more.Read “Emmett Till Haunts the Library in Money, MS” and other poems curated for “Saying His Name” here.