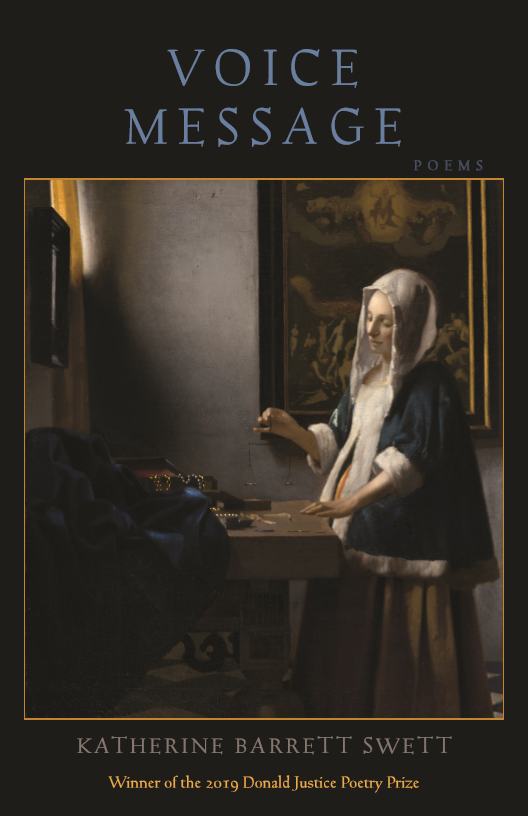 Voice Message explores through villanelles, sonnets, quatrains, and even free verse the consolation and devastation that art and poetry offers. Swett engages the art of Vermeer to guide and contextualize personal pain, exploring how can art offer motivation, comfort, and release. In these poems, there is tenderness for our vulnerable earth as well as for our fragile human bodies. Swett’s debut book is a poignant and measured collection that reminds us of art’s ability to heal.

If there was ever a moronic debate, it’s that between free verse and formalist absolutists, each side so radically ignoring the virtues of the other while inventing its faults. Katherine Barrett Swett’s new book summarily negates, for example, the charge that careful formalism debars genuine feeling. Voice Message, a protracted reflection on the death of her daughter, is both painful and redemptive to read; it is also both a triumph of formal expertise and of emotional accuracy, the one dependent on the other. The sheer stress of holding onto one’s sanity under the brutal circumstance that the volume recalls is perfectly limned by the tautness of Swett’s measures. Cannily, Robert Frost noted that we refer to strains in music. He had in mind work like Katherine Barrett Swett’s.
—Sydney Lea, Vermont Poet Laureate, 2011-15

In this powerful collection, Swett understands the force of traditional forms and, in poem after poem, presents us with a world almost worrisome in its wonders—how much grief we can hold, how much hope we will need.
—Erica Dawson

In this beautiful book of poems, which gives voice to unspeakable loss, Katherine Barrett Swett enlivens and animates old forms and makes them sing anew.  Hers is a dazzling contemporary poetics, in which, in a wry, adroit crown of sonnets, based on paintings by Vermeer, “a grace note struck…shimmers like a pearl.” These poems bring to mind Mona Van Duyn’s stately, syncopated verses, tempered with flashes of humor and verbal derring-do and delineate not only dark places but also the pleasures of a long marriage, sitting out on a summer evening, watching the firefly’s “disco frenzy…impossible to trace with just the eye.”  A marvelous collection.
—Cynthia Zarin 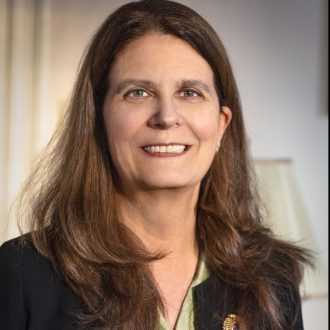 A high school English teacher, Katherine Barrett Swett lives in New York City. She received a PhD in American Literature from Columbia University. Her poems have been published in various journals including, The Lyric, Rattle, Mezzo Cammin, The Raintown Review, and The Orchards Poetry Journal. Her sonnets were finalists for the Nemerov Contest in 2016 […]